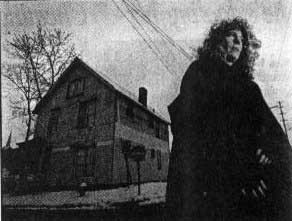 Leslie Blankenship stands on Gift Street in front of house that once belonged to the Deardurff family.

The phrase "pioneer women" brings to mind images of determined and resilient people who prevail over difficult circumstances and deserve to
be remembered.

It fits nicely some of the Deardurff women, members of one of the first families to settle in Franklinton, historian Leslie Blankenship
said.

Abraham Deardurff and his son, David, arrived in Columbus to scout the area shortly after Lucas Sullivant mapped out what he called Franklinton.
Blankenship said the Deardurffs actually settled in a few years before Sullivant returned in 1801 with his bride.

(Sullivant had gone on to plat more communities, including North Liberty, along the Big Darby Creek) Blankenship became interested in the Deardurff family while doing research for the Franklinton bicentennial celebration two years ago.

Among the Deardurffs she plans to include in a book on the family is Catherine – wife of Abraham and mother of David. A German immigrant to Pennsylvania, she and Abraham came to Franklinton in fall 1798. She was widowed in spring 1812.

Somewhere close to the Virginia border – West Virginia had not yet been carved out of that territory – her husband’s riderless horse was found and his empty saddlebags slashed. His death left her with four sons and two daughters to care for alone.

"In her split- bottom chair with her knitting and her old Dutch Bible, she spent many an hour reading the ’guttes buch’ or counting
her ’geld’ as she called her little hoard of gold pieces," according to A Centennial Biographical History of the City of Columbus and Franklin County Ohio published in 1901.

Although Catherine Deardurff lived to an advanced age, many women in the family died young, including three wives of her son David, His fourth wife, Rachel Ford, was born on a Maryland plantation worked by many slaves.

Blankenship said Rachel was described as "having Methodist ideas," which Blankenship suspects is how her detractors explain her decision to free 25 slaves that her family had given her.

The family disinherited her, so she left the plantation with two brothers, came to Franklinton, where she met and married David Deardurff, then bore
him eight children. Among their children were twin girls, Malinda and Clarinda.

Although little is known about Clarinda, Malinda married George Davidson Sr. After his death in 1881, according to the centennial history, Malinda
returned to the old Deardurff turf – Franklinton’s Gift Street.

"She purchased a cottage at the north end of it, and there, in comfort spent the last 18 years of her life with her daughter Alice, now a prominent physician." Alice Davidson, born in 1855, was described as a loverof books, flowers, plants and animals.

Her affinity for study led her to become a nurse, after which she spent four years working at the "Imbecile Asylum" that had been set up farther
west off W. Broad Street. In 1878, she married Robert Gillespie of Dayton. The couple had two daughters, Bernice and Carol. But after few years together,
Gillespie died.

At that point, Alice also faced the need to care for her widowed mother. To better support her loved ones, she sought more nurse’s training in Indianapolis, then came back to Columbus and worked with a series of doctors.

That world apparently whetted her appetite for further education With backing from some physicians, she entered to University of Medicine and Surgery in Cleveland, graduating in 1893 with, among other honors, $25 in gold for the best thesis on gynecology.

After postgraduate study at the Electro-Therapeutic Institute in Rochester, NY, Alice came back to Columbus to specialize in the treatment of women. In 1895, she married Dr. Oswald Allen of Cleveland. They shared a clinic at 203 W. Goodale St. She died in 1924 at age 69.

Blankenship said records indicate there were three generations of Deardurff women around for the Franklinton centennial celebration in 1897, Malinda lived to see it, but died in 1899. Dr. Alice and her daughter Carol took part in programs.

Alice wrote a poem and Carol dressed as her great-grandmother Rachel. Dr. Alice’s other daughter, Bernice Gillespie Strader,helped preserve Franklinton history during the flood of 1913 by salvaging genealogical records from the high waters.

She became the Franklinton School historian, a post she held for a number of years. Strader is thought to be the last of the Deardurff family to live in the Franklinton area.

Blankenship will discuss her findings with members of the Franklinton Historical Society on March 17 at the Franklinton branch of the Columbus Metropolitan Library, 1061 W. Town St. The meeting starts at 6:30 p.m. and is open to the public.