Pairs of volunteers watched anxiously as a screen sifted archaeological treasures from cold damp dirt. The group of about 20 professional archaeologists.

Ohio State University students and history buff's shared a quiet sense of excitement and urgency as each historical find was unearthed yesterday at the Deardurff House a 193-year-old log house in Columbus.

The house is the oldest known structure in Franklin County still on its original foundation. It was built in 1807. just four years alter Ohio achieved statehood.

Archaeologist Andrew Sewell, one of three principal investigators hired to lead the dig, scrutinized a brass plate about 5 inches in diameter. He rubbed it and flipped it over and over. trying to discern the inscription on the dirt-covered find. Satisfied as to its historical value, he determined that the plate dates to at least the early 1800s.

"This is rare. You don't get many chances to do an archaeological dig like this within a city's limits." Sewell said. The plate is one of many artifacts found in the dig which continues today.

Animal-bone fragments, pieces of pottery and brick, nails. plates and a clay marble were unearthed. They were just the types of remnants that Walt Reiner, 67, a real-estate agent and property developer from Westerville, hoped to find.

Reiner. who bought the Deardurff House about 30 years ago, authorized the dig as part of his effort to restore the house and turn it into a museum by 2012, in time for Columbus' bicentennial celebration.

The restoration will cost at least $400.000, most of which Reiner will pay. He owns several log buildings in central Ohio. including his realty office. which he converted from a 19th century log cabin. He said he hopes to turn the Deardurff house's neighborhood into a replica of what the Franklinton neighborhood once looked like. 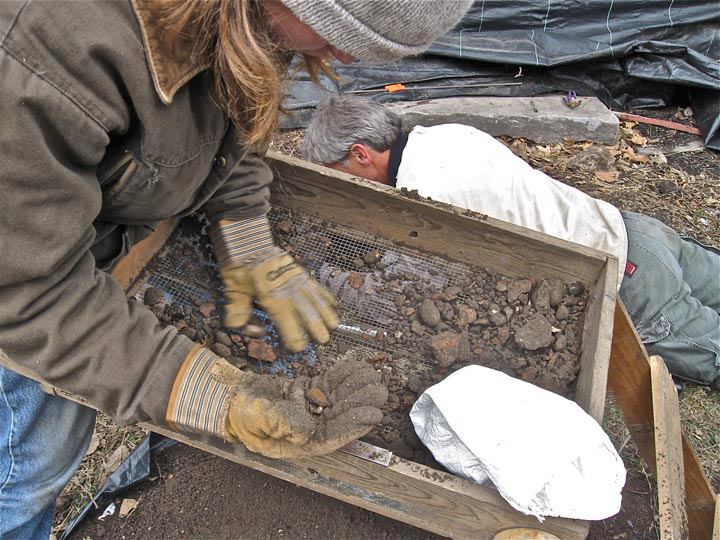 For the 39 volunteers. the dig was a rewarding opportunity to "get their hands on some old dirt and stuff." said Anne Lee, an archaeologist and principal investigator on the dig. "People are generally interested in archaeology and the history of this area." she said, noting that the two-day dig had a waiting list of at least 30 others who wanted to volunteer.

"It's important for a lot of people to have sort of a connection to their history." For Benjamin Keller, fourth-year anthropology student at Ohio State University, participating in the dig not only added practical experience to his resume, but it also was fun.

"You get to be outside digging holes." he said as he tossed dirt onto the screen for his partner to silt. "Who doesn't like to do that?"

(This Article is being reposted here to archive the history of the Deardurff House and Deardurff Ancestry.)

Images of the Deardurff House can be found by clicking here.